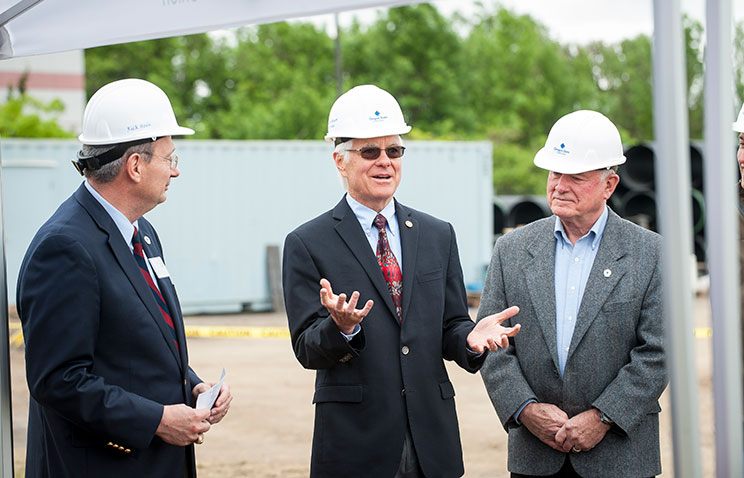 Biff Traber (pictured above in the center) began his first four-year term as mayor of Corvallis in January 2015, winning re-election in 2018. He served two terms on the Corvallis City Council in Ward 8 before being elected mayor, and he currently serves on the board of the Oregon Cascades West Council of Governments (OCWCOG), as well as other local and regional boards. Before entering public service, Biff was an executive in the software industry.

What did you like most about participating in Leadership Corvallis?

“By the time I took the class, I had been living in Corvallis for five years, but my work had me traveling three weeks out of each four, so I was a resident – but not really a participant in Corvallis life. The breadth of the class let me see all the aspects of the city.”

Describe your most memorable experience volunteering or serving in a leadership position in the community. Why is this experience so important to you?

“Becoming mayor of this great little city is my most memorable experience. It is the ultimate goal of my work to have an impact on Corvallis and to give back in general.”

What is your biggest accomplishment in your current line of work?

“Given my line of work is now politician/mayor, my biggest single accomplishment since then has been re-election. The most rewarding part of the job is making progress on resolving the various challenges to the city and incrementally improving who and what we are as a community.”

What is one surprising thing about you that not many people know?

“I am really quite a shy person – an introvert – which is surprising for someone who is now a politician. Over my adult life I have learned by doing and being willing to try something when I had the opportunity. On a more mundane level, I have lived in Corvallis longer than I have ever lived anywhere. And I am still a newbie!”

If you could recommend one thing to incoming Leadership Corvallis participants, what would that be?

“Keep a broad open mind. Even if you have lived or worked here for a while, there are always new things to know. Connect with your classmates and with the presenters after the class. Encourage the presenters to explain what’s behind the information they are presenting to your class.”